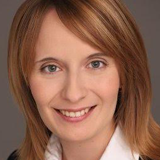 Christina Erlwein-Sayer is a quantitative analyst and senior researcher working on the topic of financial analytics in general and models and tools for portfolio construction and credit risk assessment in particular. Dr Erlwein-Sayer completed her PhD in Mathematics at Brunel University, London in 2008. She then worked as a researcher and consultant in the Financial Mathematics Department at Fraunhofer ITWM, Kaiserslautern, Germany before she started her role at OptiRisk in 2015 under a joint project between OptiRisk Systems and its partner Fraunhofer ITWM. Prior to the current assignment Dr Erlwein-Sayer had presented workshops on behalf of OptiRisk at IIM Calcutta in Kolkata and Mumbai. She was also the lead member of the training partnership between OptiRisk Systems and Fraunhofer ITWM and presented at many of the workshops; notable among these was the training delivered to the World Bank in Washington. Dr Erlwein-Sayer is fluent in German (her native language) and in English.

The Event will Start In
Book Now