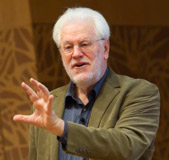 Tom Gilb has been an international independent consultant for most of his working life, which started at IBM in 1958.
He has spent his time leading projects, but far more decades advising on projects and project management corporate wide. He also teaches project management courses (at Unicom and BCS SG Quality in UK).

He has published 10 books related to project management. The latest is Value Planning (digital only).

He has been credited with a number of innovations, including being the first to write books and papers arguing for agile methods. The Agile Manifesto signers (like Sutherland, Beck, Cohn, Highsmith) acknowledge him in writing as the ‘Grandfather of Agile’.

He has spread his methods to corporations worldwide such as Citigroup, Credit Suisse, JP Morgan, Philips (parts of the corporations), and Intel, IBM, Ericsson, Hewlett Packard, and Boeing (corporate wide). He is credited with the invention of CMM level 4. The first book on Software Metrics (1976). He has influenced projects and PM methods at a very large number of major multinationals. His requirements methods have now been adopted by IEEE as best practice in their requirements courses.

His latest book, Value Planning, gives an in-depth description of his practical methods, and his case studies, from world-wide practice.

He believes that Zero Project Failure should be the norm, if much more disciplined ‘engineering’ style project management methods were used. Quantification is the key idea.

He has been invited to lecture at very many universities worldwide, including many British; more recently Imperial College and London Metropolitan University.

He is an Honorable Fellow of the British Computer Society.