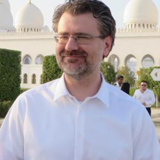 Sebastian is an international business leader with experience in both the military and private sectors and specialization in Information Technology Security and Cyber Defense. He has spent the last 20 years working for high level and highly exposed national and global organizations focusing on protecting their IT environments. He has racked up an impressive record of achievements and advancements on multiple continents and traces his IT beginnings to his unusual teenage job of computer programmer for one of the largest German multinational corporations.
Shortly thereafter, he became a military officer with the German Air Force, where he rose quickly through the ranks to become responsible for all German information security services through the Northeast and Southern corridors of the U.S. Before leaving the military, he was appointed Chief Information Security Officer for NATO’s International Security Assistance Force (ISAF) in Afghanistan at ISAF Joint Command. He then successfully transitioned into the NATO organization itself, being a member of the team that directed the design and implementation of NATO’s Computer Incident Response Capability, a system that would eventually protect the highly confidential data of the international organization. Most recently, Sebastian transitioned completely into the private sector by accepting the job of Chief Information Security Officer for Isabel Group, headquartered in Brussels, Belgium. He holds a Master’s degree in Computer Science from the German Armed Forces University, a Master’s in Executive Leadership from the Georgetown McDonough School of Business, and a LL.M. degree from the Katholieke Universiteit Leuven in Belgium. He is a Certified Chief Information Security Officer (C|CISO) and a Certified Information Systems Security Professional (CISSP), among other professional certifications.