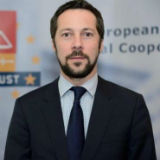 Koen is a Dutch public prosecutor, working for the EU agency Eurojust. At Eurojust, he has been involved in the judicial coordination of various cases, i.e. Operation Blackshades, Operation Onymous / SilkRoad 2.0 and Operation EMMA. He started his career in 1999 at the legal aid office in ‘s-Hertogenbosch, where he provided pro bono legal assistance and specialized in prison and migration law. Before starting his judge / public prosecutor traineeship at the Regional Court of Zwolle, he worked for several years as a senior lawyer at the Migration Chamber of the Court in Arnhem.
In 2007, he began working as a prosecutor in Arnhem, dealing with a variety of cases (i.e. murder, homicide, armed robberies, drug trafficking) with a special focus on Cybercrime. Mr Hermans also spent one year with the Dutch division of the European Court of Human Rights in Strasbourg. He is the Vice Chair of the Eurojust Taskforce on Cybercrime, Member of the Eurojust Counter Terrorism Team, and Eurojust Contact Point for Maritime Piracy.