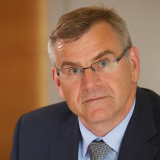 Scott is now working with Kynetix on their Distributed Ledger Technology initiatives in the commodities arena.

He was a founding Director of Chi-X Europe where he was responsible for the Chi-X Post Trade market model and all Post Trade solutions. This included the relationship with Fortis (now ABN Amro) and the creation of a new Central Counterparty which become known commercially as EMCF, the European Multilateral Clearing Facility (now merged with EuroCCP). He has a long experience in the post trade arena including industry representation on the European Commission MOG (Monitoring Group) for the implementation of an improved Clearing and Settlement framework.

Scott joined Chi-X from LCH.Clearnet where he held the position of Director, Strategic Marketing where he was responsible for strategic relationships, marketing and business development to further extend LCH. Clearnet’s business model of pan-European services. Prior to this Scott was one of the founding team to establish and launch the Australian Derivatives Exchange where he was again responsible for all post trade services.